February and March have seen steady progress on Here Come The Dead.  There is now an assault rifle option in-game that the player will have to unlock.  When fired with one hand it jumps around a lot, requiring frequent aiming adjustments with your actual hand (1:1 hand controls with the Razer Hydra, don’t forget!).  Holding on with your second hand steadies the rifle, making your shots more consistent.  And as you can see in the above image, there is also a working scope for the rifle — again, something that will likely need to be unlocked.  Being VR, you need to actually hold the scope up to your eye in order to use it.

I’ve also been mocking-up a firing range where the player may test out each of their weapons.  Normally this area would be undead-free so the player can focus on weapon handling rather than staying alive.  That’s what the rest of the game is for!  This level will likely be completely revamped for the game itself, and includes a few surprises.  I would also imagine playing it co-op could be a lot of fun, just hanging out with your buddy and trying out various things, talking over positional voice chat…

Along with these changes is a move over to a full data model for the game.  This means that weapon, enemy, and even player attributes are determined based on lists of data rather than hard-coded into the game itself.  This makes it much easier to tweak values, especially while trying to balance the game.

When I started the migration from Torque 3D to UE4 in the summer of 2014 it was in anticipation of Oculus Connect 1, and running on the DK2.  There wasn’t a lot of time to both learn a new game engine, and port HCTD over.  UE4′s Blueprint system really helped out with the transition by holding my hand and providing me guidance on what I could and couldn’t do with the various components.  I still had to implement my custom Razer Hydra and player code, as well as my custom IK solution for the player’s arms and spine in C++, but there wasn’t much else I couldn’t do with Blueprints for what I needed at the time.  I also relied on UE4′s Blueprints to update the game demo for the TAVES 2014 showing in November.

In December 2014 I took time to review where HCTD was heading, and started to plot its course towards a 2015 release.  Based on what I had learned in building the OC1 and TAVES demos of HCTD, I decided that I needed to move away from a Blueprint heavy structure and into a C++ one.  Here were some of my reasons why:

Throughout December 2014 and January 2015 I have been working to rebuild the game with multiplayer in mind using a C++ base.  I still use Blueprints as they are still awesome, but now in a more “glue code” capacity, similar to how I would use an engine’s scripting language.  Along the way I’ve improved how the player starts the level by touching their wristwatch (some demo players had trouble), added in weapon recoil, and further optimized the game’s performance under UE4 4.6.  All-in-all a good base for a new year.

We had a great time demoing Here Come The Dead at the TAVES Consumer Electronics Show on November 1.  We were part of the TorontoVR showcase that included other local developers in a corner of the New Technology area.  About 75 adults tried the game over the seven hours we were there.  Enjoy the following highlight reel from the show!

Gnometech will be attending the TAVES Consumer Electronics Show on November 1 as part of the TorontoVR community showcase.  We’ll be giving demos of the new Unreal Engine 4 and Oculus Rift DK2 version of Here Come The Dead to all TAVES attendees (admission required).  How many zombies can you take down before time is up?

Oculus Connect 1 was held at the end of September at the Loews Hollywood Hotel.  It was a great chance to mingle with other virtual reality developers and share our projects.  On Saturday night we were able to give a demo of Here Come The Dead to the Oculus Developer Relations group. 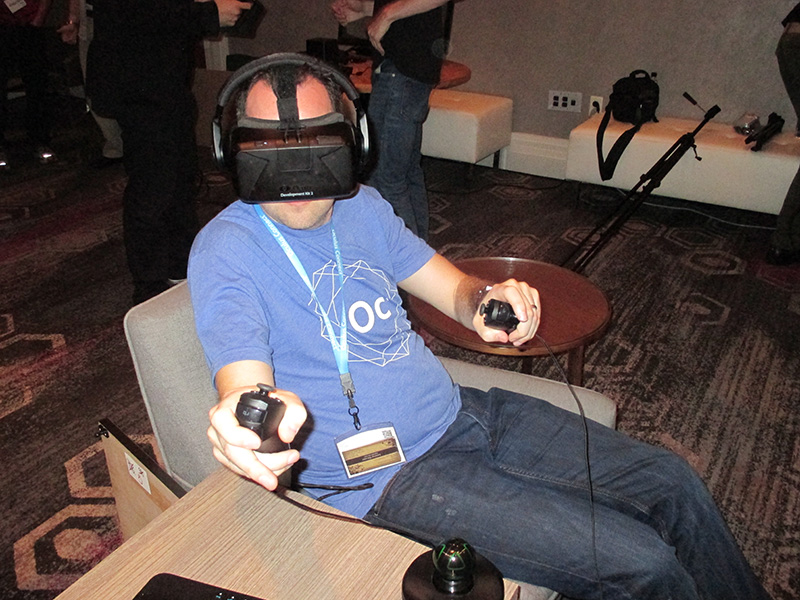 The lead up to this was a 3 week crunch to get Here Come The Dead up to the same level we showed at DigiFest 2014 in May, but this time using UE4.  As this ended up being the last demo of the night, we were able to make use of the conference hardware to show off the demo to some OC1 attendees until they kicked us out, as seen above.

We look forward to the next Oculus Connect!

Here Come The Dead now being developed with Unreal Engine 4

We are proud to announce that Here Come The Dead is now using the power of Unreal Engine 4 to help you fight off the undead hoards. 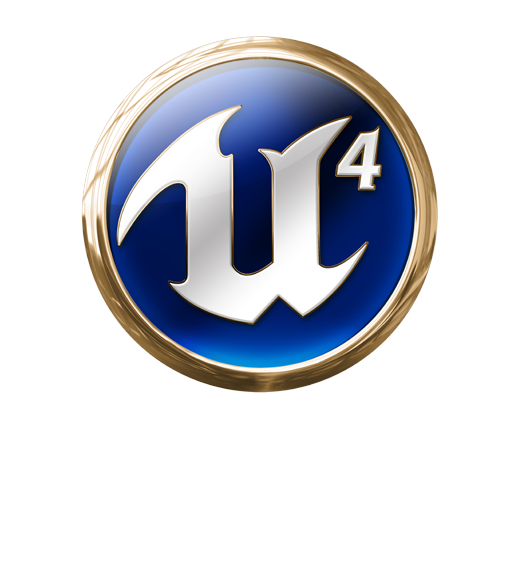 Our previous engine was a real workhorse and allowed Digifest 2014 attendees to experience their first taste of virtual reality on the DK1, mixed with zombies and 1:1 hand controlled weapons.  But with the latest advances in graphical and HMD hardware, it is time to move on.  With UE4′s full access to its source code, it already feels like home.

We had a great time showing off Here Come The Dead at Toronto’s Digifest 2014 Intel Family Day on May 9.  Nearly 100 kids and adults tried out the game during the six hour show.  Enjoy the following video that captures the excitement!

Gnometech will be attending DigiFest 2014 Intel Family Day on May 10 with the first public showing of their new game Here Come The Dead.  The first level prototype, which makes use of the Oculus Rift and Razer Hydra, will be playable by the public at the show.  Come shoot some zombies with us!

Welcome to Here Come The Dead

Welcome to the new Here Come The Dead web site.  Here you’ll be able to find all about Gnometech Inc’s newest game that has been built for use on the Oculus Rift from the ground up. 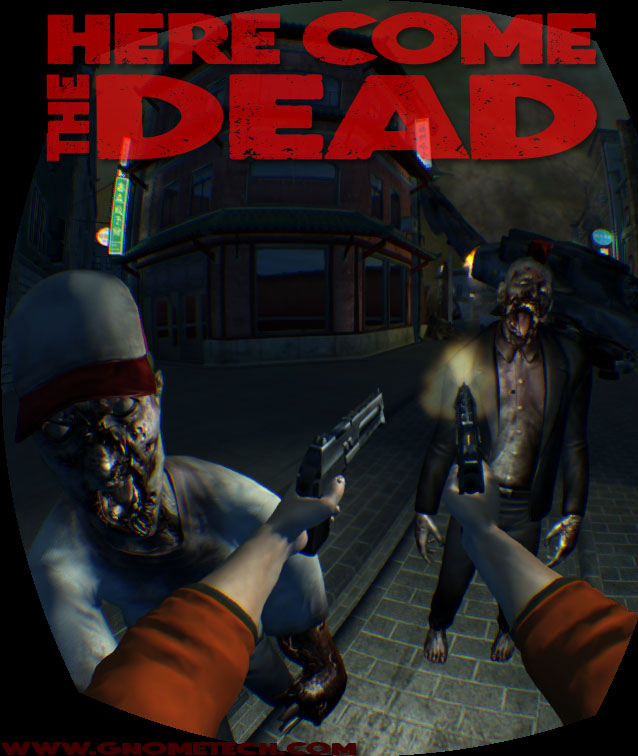